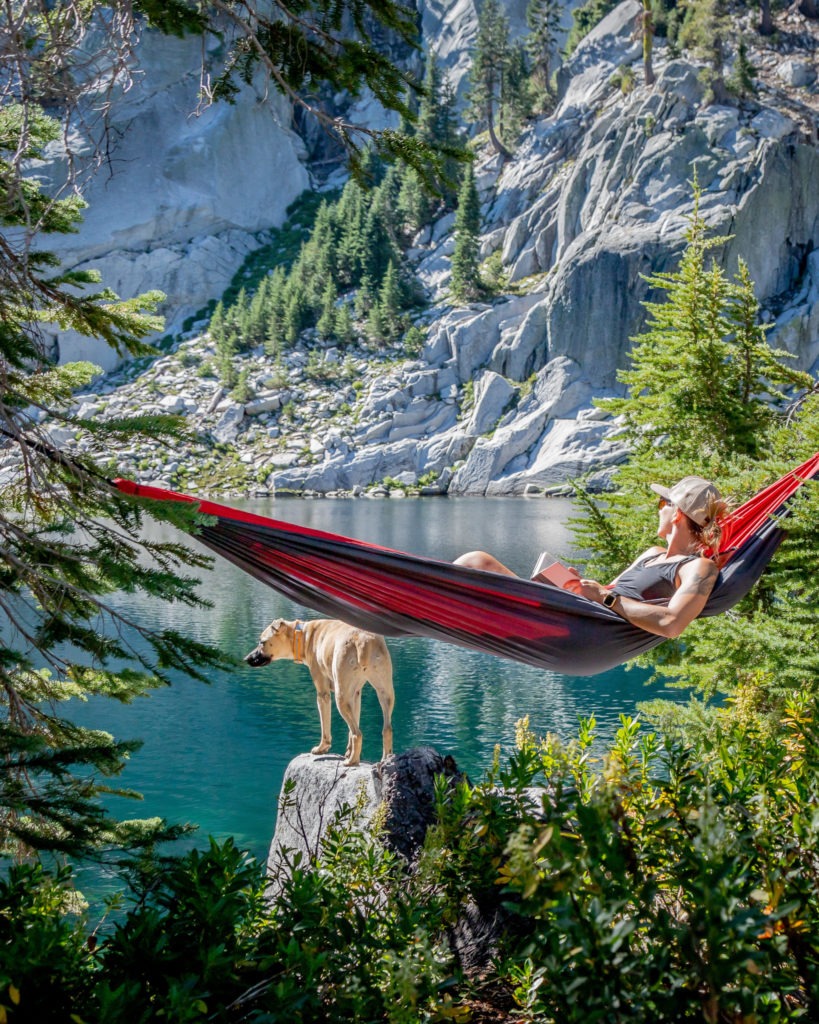 Why did we pack all this beer?! What should have been a quick 3-ish mile backpacking trip chasing brookies had somehow turned into the three of us staring down an avalanche chute questioning our decision-making.

The Trinity Alps Wilderness provides an epic and well-known playground for outdoor enthusiasts here in Northern California. With over 500,000 acres of land and 600 miles of trails, there is plenty of country to explore.

In search of solitude on an early Fall weekend, our group had been poring over maps of the wilderness area, we eventually set our sights on a trio of difficult-to-get-to blue pools that appeared to be the perfect destination for a secluded trip. There are two ways to get to the main lake, the usual trail, an arduous 8 mile trek devoid of water, and the “shortcut,” discovered online. The trailhead was just outside of Weaverville, and while we were aware of a little scrambling that needed to be done to drop into the basin, our research had us confident about our plan.

Straight out of the gate we made a mistake. Spirits were high and the views were distracting, so rather than verifying we were on the correct trail, we forged ahead up the ridgeline, excited that we’d make it to the lake in just a couple of  hours. As we climbed, we started to notice a trail quite a bit below us, snaking around the hillside. A quick gps check and sure enough, we realized our mistake. No problem, we’ll just sidehill  and drop down to the correct trail and be on our way!

Anyone who has bushwhacked through manzanita knows how this plan played out. What looks like soft, green foliage from above proves to be a relentless battle to push through, especially with two dogs wearing packs and a few treacherous scree slopes thrown in for good measure. Nevertheless, we persisted. Sweaty, scratched and tired, we finally landed on the correct trail less than a quarter mile from where we had  parked the car a few hours earlier. Oh well, easy cruising from here, right? 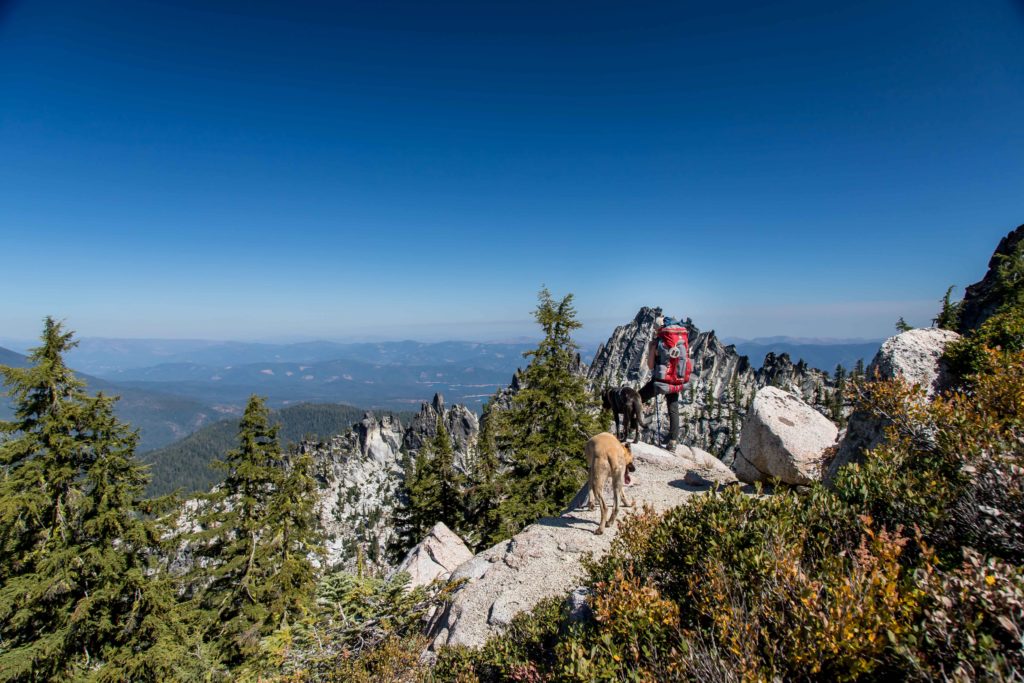 A couple miles later we finally found ourselves on the final ridgeline, just below the jagged granite peak looming over the lake’s basin. Referencing our map, we glanced wearily down the avalanche chute that was our intended route. Sketchier than expected, but it looked doable. Step by step, we slowly picked our way down the hillside, eventually removing the dogs’ packs and then in a couple spots actually helping them down via their pack harnesses, knowing that one mis-step would lead to a very long and hazardous tumble for any one of us. By the time we reached the bottom, we were thoroughly exhausted and reminded that in the Trinity Alps, even the short, “easy” hikes can throw plenty of curveballs at you.

Soon enough, we set up camp, cracked open a few of those heavy beers (FYI, one sixteen ounce beer weighs just over a pound), and started exploring the shoreline, fly rods in hand. As the sun dipped past the high rim and silence crept across the lake, the brook trout began gently rising. Before long, the quiet gave way to the echoing splash of a hooked trout. 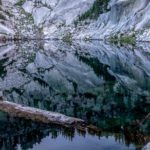 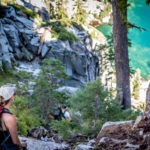 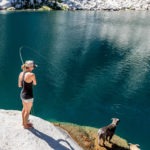 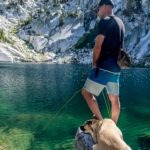 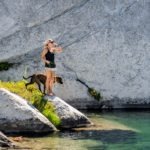 The next day was all sunshine and fly lines. Once the sun hit the lake, visibility was perfect – watching brookies materialize from the emerald depths to attack our sub-surface flies was exhilarating. As the day progressed, we switched out to dry flies and enjoyed the exuberant, splashy takes. High alpine lakes don’t generally support large fish, but the fish that are there are typically eager for a meal. 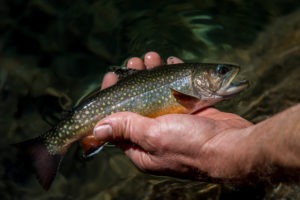 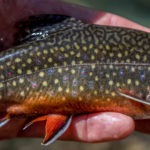 While we were cooking up dinner, the clouds started to roll in. Soon enough, we were driven to our tents when the skies opened up. None of us slept much that night, between the howling wind and the rising pool of water under the tents. We had a brief window of time in the morning to get a fire started and attempt to dry out our gear, but when the clouds started dropping again, we knew we needed to get out of there. 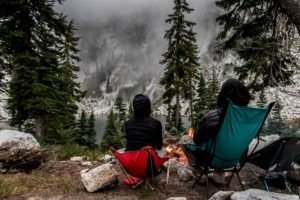 The previous evening, we had noticed a bear on the other side of the lake, picking his way up the northeast boulder-strewn slope (even the wildlife knew better than to attempt that avalanche chute!). We had all agreed that while it wasn’t the way we came in, it looked like a solid route to make our way out. 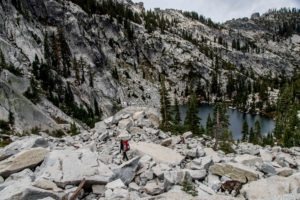 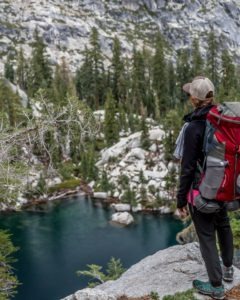 Following the topo map, we worked our way across the boulder field and sidehilled up toward the ridgeline to an all-fours-scramble final ascent, which I imagine was very similar to the bears exit the day before. Success! From there on out, we caught back up with the trail and picked up the pace, as the weather turned more and more ominous. By the time we reached the final ridgeline, there were huge, wet snowflakes coming down on us. We only had a mile to go, but it was a soggy, cold and uncomfortable mile. 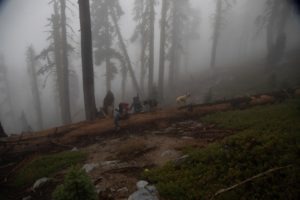 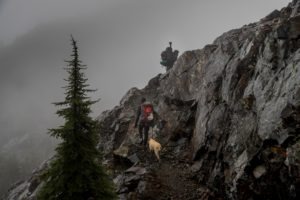 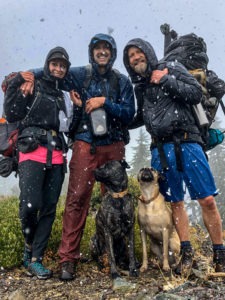 In hindsight, this was one of those trips that sticks with you for a number of reasons. Yes, some things went wrong, some of which we could have controlled, but pushing forward through the inevitable physical and mental challenges helped create an incredibly satisfying adventure. The icing on the cake being a beautiful granite lake to ourselves with plenty of willing brook trout, and no shortage of beer. 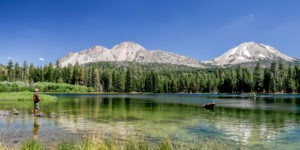 While fly fishing Manzanita Lake, that heartbreaking moment when a sight-fished trout “outsmarts” us is 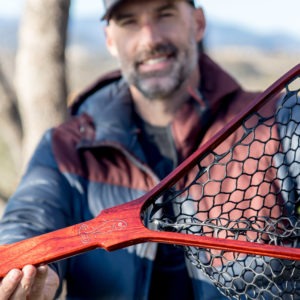 Landing a fish is a wonderful thing, seared into memory. It’s a moment to admire 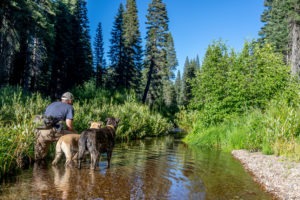 California is home to a number of native trout species that are genetically distinct, at

The nasty weather this time of year can provide so

Awesome day spent on the Klamath with @theflyshop

Dawn over the city of Redding and some pretty amaz

The Lower Sac is a remarkable backyard fishery. .

Hat Creek is a beautiful Fall trout venue with som

Some of the best fishing buddies have 4 legs. . .

Lots of October caddis showing on the Sac right no

It’s getting to be that real pretty time of year

The one that got away… The fishing gets us there

There are some pretty spectacular places to lie on

Jumping into Fall like... Happy first day of Fall! 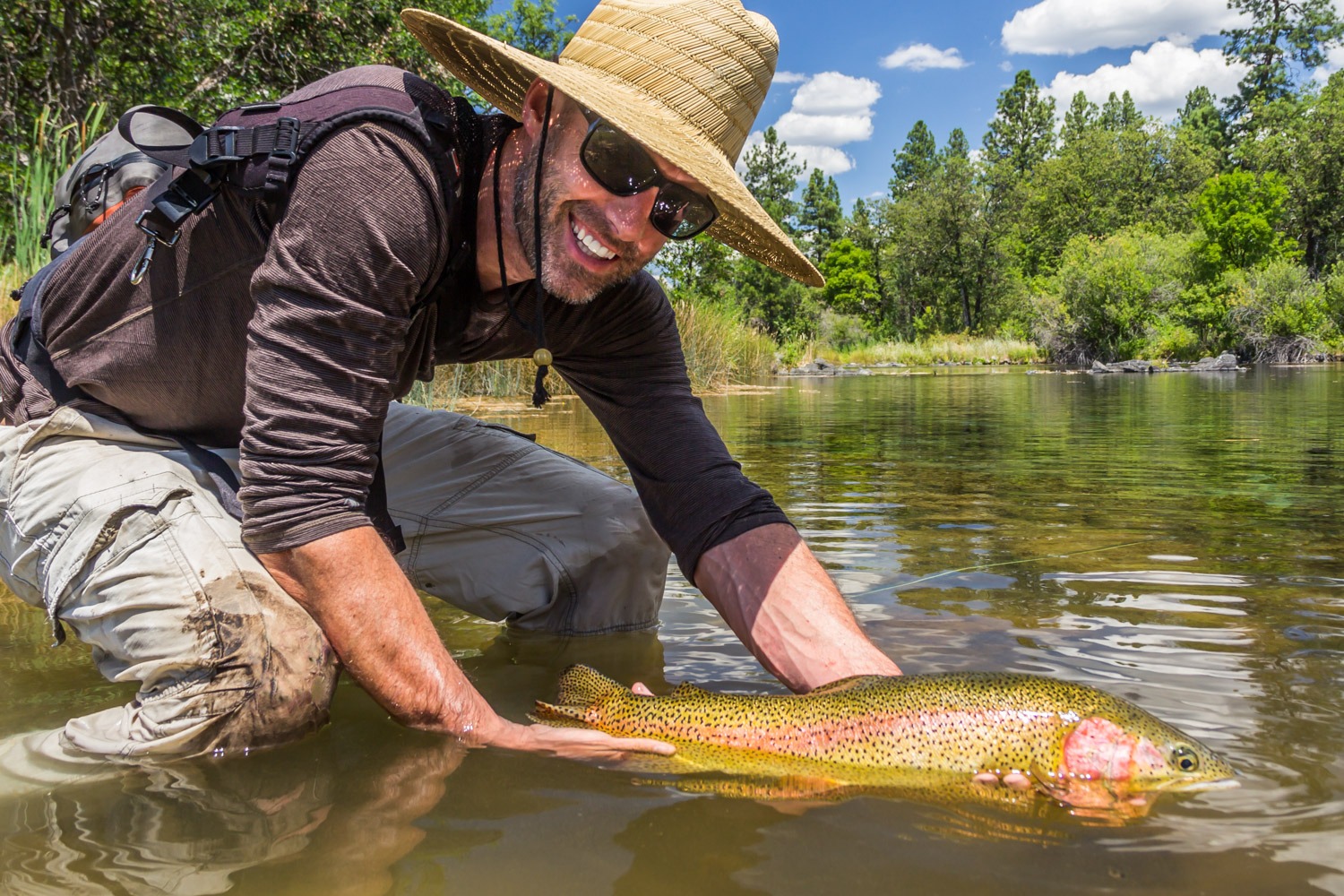 Dan has spent the majority of his life exploring Northern Ca and would love to chat about the area's phenomenal outdoor recreation!
Lifestyle is a choice
Live on the Water
Contact Us